My school requires all new international faculty to study Mongolian for the first year they are here. I was very glad about that. We get “course relief” to do it—supposedly it takes the place of teaching one course—but in my case, my department’s need for instructors was so great that I do it on top of teaching a full load of four courses. I’m happy for the opportunity, though, because not only did it force me to learn to read the Cyrillic alphabet (so I can read signs), but it also helps a bit with basic communication. And I love learning new languages. I pay for the classes, but the cost is not very high, around $50 per month for three private classes a week. They take place just upstairs from my office, at the Language Education Institute (LEI), so it couldn’t be more convenient.

My teacher is Tungaa. She is a good teacher. She’s very patient and kind, and she has a good sense of humor. Her whole face lights up when she smiles and laughs. And she is good about repeating things when I look at her like a stunned mullet as I try to parse the words she has just said. She is, as I learned through our “conversations” in Mongolian, 54 years old and a grandmother. She’s a very popular teacher, so her schedule is packed. When I first started, I had classes on Mondays and Wednesdays at 5:00 pm, which was hard for both of us. Sometimes she was visibly tired, and I was usually exhausted. My third class was Friday after lunch, which was a lot better. After a few weeks, she asked me if I could switch to Thursday at 11:00 (between two of my classes) and Friday at 11:00, so now my Mongolian learning is packed at the end of the week, but on Fridays, with two hours of lessons, I make a lot of progress.

I love studying languages. As I get older, it gets more challenging. I can feel a difference in my ability to retain new information, especially when I’m tired at the end of the day or the week. I hadn’t had the time or capacity to study any languages in my regular life in California, though Emma and I started with a Pimsleur Swiss German program in the car a few months before we travelled to Switzerland last summer. I know a smattering of Swiss German already from life-long exposure to the language and speaking some as a child, but it was good to have an excuse to practice it with Emma, who picked it up pretty quickly. But I was so busy getting our house ready for house sitters before we left for Mongolia that I couldn’t start on Mongolian until after we got here.

Mongolian is definitely challenging. The Cyrillic alphabet has been easier to learn than, say, the syllabaries of Amharic, Hiragana, and Katakana (from when I lived in Ethiopia and Japan). But there are more vowels than in English, and I can’t always hear the exact distinction between them. Many of them are not pronounced in spoken language, anyway, though they appear in written language. Also, my Mongolian for Beginners textbook tends to present a LOT of information all at once. Like, the numbers from one to a million. Or 30 adjectives at once. Or all variations on the genitive case (basically, the possessive form of a noun). When I taught ESL, the current wisdom was to not teach more than 10-12 new words in one lesson, or to teach one structure at a time, to give students a chance to master things before moving on. I’m still working on the 30 adjectives from a few weeks ago, and in the meanwhile, I’ve “learned” colors, clothing, days of the week, months of the year, and the genitive case. Whew!

One of the benefits of learning at LEI is that they have extra events for the students. There was a beginning of the year field trip to the Chinggis Khan statue complex, which unfortunately was held on a day when I had to teach so I couldn’t attend. (I was able to see the statue on a weekend trip a few weeks later, and I will write about that in another post.) They also have “Mongolian Culture Day,” which just happened on Friday, November 2. It’s a whole day of activities related to Mongolian language and culture, including several competitions for the students: handwriting, speech, singing, and reading. I signed up for giving a speech, and I wrote out one of the stories for the handwriting competition in my child-like handwriting. (Reading and writing make me feel like I’m in first grade again, carefully shaping each word and trying to sound them out.)

OK, so Mongolian Culture Day. It started out an hour late, but that was OK, because it gave me extra time to obsess over my speech, which I was nervous about. The teachers and LEI staff set up displays around the sides of the room, including traditional clothing, goat ankle bones (which are used for a variety of games), cups, bowls, utensils, and several kinds of dairy products, including horse and camel milk and solid products like cheese and dried curds. The walls were covered in examples of traditional Mongolian script, as well as the students’ writing samples. Tungaa was setting up a table in the back of the room for preparing some traditional Mongolian food for us to try, including a salad, milk tea, and dumplings.

The festivities started out with an informative presentation on the history of Mongolian writing. It was way more complex than I’d realized, and I’ll try to write a separate post on it. But I hadn’t realized that in the 1940s they tried out the Latin alphabet for Mongolian but it didn’t work with the number of sounds the language has, so they switched to the Cyrillic alphabet at that point. But over the centuries, several different scripts had been used. Now students are learning the vertical script again (Mongolian was written from top to bottom of a page), but the Cyrillic writing remains official. Many Mongolians can’t read the traditional script because it wasn’t in use for a couple of generations.

Next, we all introduced ourselves in Mongolian. I choked and fell back on the Japanese pronunciation of my name, which was weird (since I’ve been here, a lot of the languages I’ve learned have been coming back to me even though they are nothing like Mongolian, especially Japanese and Amharic—my foreign language brain has been activated, I guess). Then I was the first to go in the speech competition—yay! My “speech” was basically an extended introduction of myself, how long I’d been studying Mongolian (two months) and how I had a 12-year-old daughter who was living here with me. Very profound stuff. I struggled and failed to understand the speeches of the other students, all of whom had been studying for a year or more.

After that, a man played the morin khuur (often translated as horsehead fiddle), a traditional Mongolian instrument that’s a bit like a small rectangular cello with two strings and a horse’s head at the top of the neck. The fingering was fascinating to watch; it was the first time I’d seen one played. Then some of the students sang, including a Korean husband and wife duet. There was also a dance performance by a young woman; it was fluid and graceful and evoked a horse’s movements. There were also some shoulder movements that reminded me of Ethiopian eskitsa. I definitely want to see more dancing while we’re here. 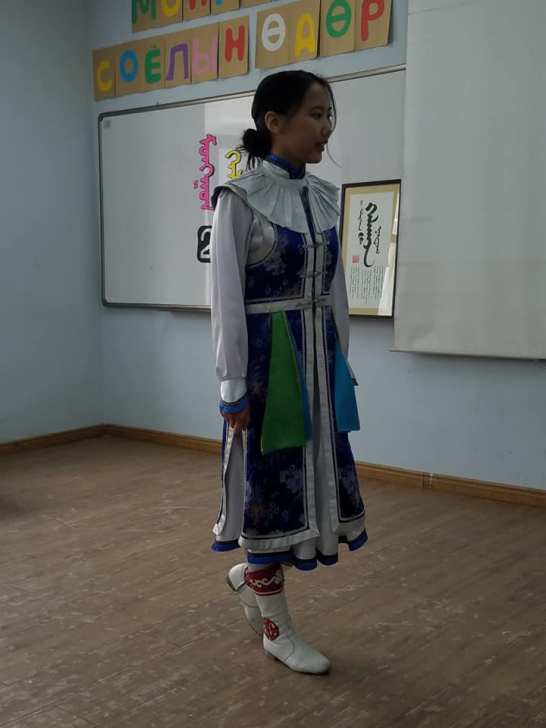 After the reading competition (which I thankfully did not participate in), there was some free time so that we could look at the displays and help with the food preparation. I made a couple of buuz, or dumplings (but they were meat, so I couldn’t eat any). This was useful, because we had some veggie dumplings on one of our weekend trips that Emma loved, so maybe I can try making them sometime now that I know the technique. I like Mongolian milk tea, suutei tsai; it’s basically boiled milk and water with salt. (They serve it in the school cafeteria as well.) Emma doesn’t like Mongolian dairy products; I think they have too much flavor for her, since she’s so used to bland American-style milk.

One of the teachers explained the different dairy products to me and how they are made. Dairy forms a significant part of the nomadic Mongolian diet, especially during spring and summer when the baby animals are born; the young livestock are separated from their mothers so that people can use the mothers’ milk. Mare’s milk, called airag, is especially valued. It’s slightly fermented, about 2% alcohol content or less, and everyone drinks it when it’s available. The fermentation process removes the lactose (which is higher than cow’s milk), so it’s good for lactose-intolerant people. Airag also has medicinal properties, believed to be good for immunity, digestion, and some chronic illnesses. 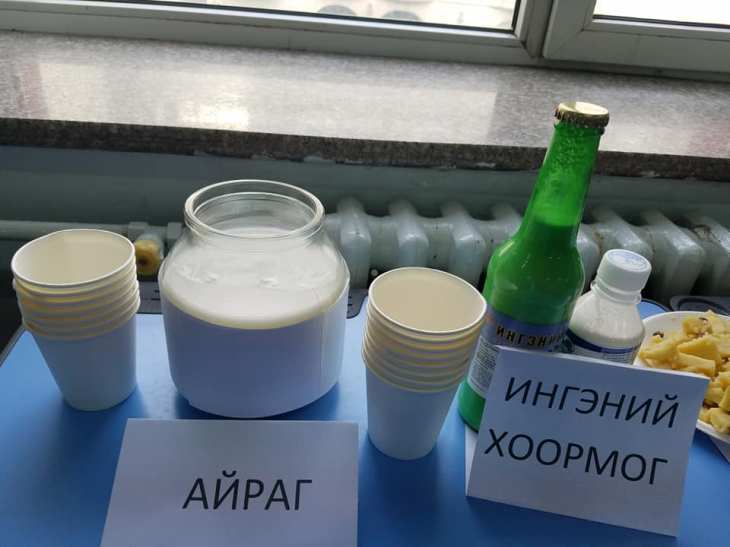 We also had a chance to eat a Mongolian salad, niislel salat, made from cubed potatoes, pickles, and other vegetables, with some cubed ham that I was able to avoid, in a mayonnaise-based sauce. Potatoes and carrots are plentiful here, and people also like picked vegetables (easy preservation). The steamed buuz we had made were also served.

After lunch, the teachers and judges presented the awards for the various competitions. I was shocked to receive the award for the best speech; one of the judges told me that they were touched by the fact that I’d participated after studying for only two months. Honestly, it was nice to receive the encouragement. I thoroughly enjoyed the chance to spend several hours steeped in Mongolian language and culture. The more I learn, the more I love it here. For me, this is the true value of living in another culture and learning another language—an appreciation for how diverse human societies are, and how people adapt and enrich such a variety of environments. I’ve been lucky to have experienced this several times in my life, and now to introduce it to my daughter as well.